You are here: Home / Blog / Choose An Olympic Mindset
Aug
24 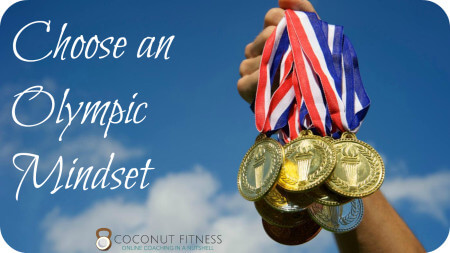 We’ve been spoilt with 16 days of athletic accomplishments at the very highest level during the 2016 Olympics in Rio De Janeiro, Brazil. More than half the world watched the Games at some point, bringing countries together and turning Olympians into true legends.

From a completely, unashamed, biased viewpoint, Great Britain did exceptionally well. It was their best medal haul for 108 years and placed second in the medal table wedged between the USA and China.

Not bad for an isolated rock off mainland Europe with a population of 65 million compared to 324 million in the USA and 1.4 billion in China.

Brits have forgotten about Brexit for a while and been basking in sporting glory! 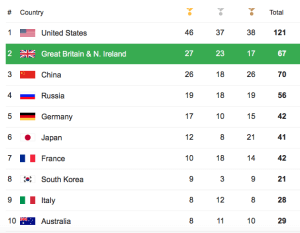 There may be some debate that Team GB have bought their medals by funding used from the National Lottery.

Despite the amount of funding that has been invested into British sport over the last 20 years there is no argument about the mindset of an Olympian.

Money always talks but the general consensus of Olympians during interviews is that they do it for the love of the sport and the pride of standing on the podium for their country.

The idea of inspiring the next generation of sporting icons is great if you are still at school or college but anyone can take something away from the Games when looking at the mindset needed to persevere and strive for excellence during a cycle of four years. 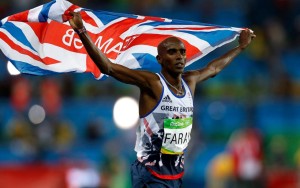 They understand it takes hard work and graft to achieve their goal.

They know that if they’re resting, their rivals are most probably training.

It’s a hardcore regimen but we can take a leaf out of their books by remembering that if we want to get fit and feel healthy it takes determination and time.

Determination to follow through with a fitness and nutrition programme and understanding that it takes months and months for that hard work to come into fruition.

That means getting down the gym three weeks before your summer holiday to ‘tone up’ isn’t going to cut it!

Want to look good in your swimsuit?

Are you an Olympic Champion at watching Game of Thrones?

All Olympians talk of sacrifice. They miss out on time with their kids and their social life outside the sport is limited. Athletes understand that in order to reach their target then they have to give up a few things in life.

It’s extreme to be making huge sacrifices but missing out on the odd night drinking and binging on fast food when you’re hungover isn’t going to take you any closer to your health and fitness goals.

The only thing on an Olympians mind is standing on the podium, achieving a personal best or representing their country.

They make up a tiny population of people walking this earth to have been at an Olympics but it’s consumed their mind for at least the last four years.

For every decision you take in life, you should be questioning whether it takes you closer or further away from your goals. Complaining that you can’t lose weight or find it hard to pack on muscle is not an exercise or nutrition issue it’s a lifestyle choice.

Imagine the following scenario if you will.

The Jamaican sprint star Usain Bolt is standing on the podium with a medal around his neck listening to the American national anthem. That’s right, he hasn’t won his ninth Olympic Gold but a surprising Bronze medal. After the ceremony, an interviewer from the BBC approaches him… 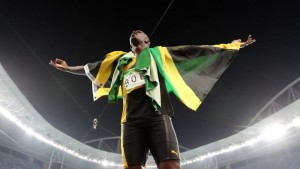 Interviewer: “Usain, you must be disappointed with the Bronze medal, where did it go wrong for you in the 100 metre final?”

Usain Bolt: “I just found it hard to train properly after London 2012.”

Usain Bolt: “Well, I missed quite a few training sessions as I went out with friends instead. I didn’t exercise for a couple of months as I had a conservatory fitted to my house. I was up all night watching reality TV shows so wasn’t sleeping properly. I decided to go on holiday for a few weeks having a blow out on booze and junk food and I’ve lost my mojo to exercise.”

Of course, this scenario is literally beyond belief, as we would never expect such excuses from one of the world’s greatest ever athletes.

So why do we think it’s OK to use these excuses on ourselves?

I haven’t made these excuses up either; they are real-life examples that I’ve heard over the years in personal training.

Now, I know elite athletes competing at the pinnacle of their sport get paid to do it as a full-time profession and I’m well aware they have access to the world’s best coaches and nutritionists but something money cannot buy is a winning mindset.

They spend thousands of hours training for the Games and dedicate their whole life to achieving their dream.

So let’s take inspiration from the Olympics and apply that winning mentality and strength of mind to our everyday endeavours so we can become champions at whatever we want to achieve in life.

Those who play the National Lottery are looking for a quick fix but ironically they’re helping out those who understand that there is no such thing in life.

Interested in achieving your health and fitness goals? Message me now. Don’t wait four years! Press the big button below…

Many new mothers complain about their 'mummy tummy'. When working with mothers, whether they gave END_OF_DOCUMENT_TOKEN_TO_BE_REPLACED

Did you make a New Years Resolution? Maybe you made it on New Year's Eve but the Veuve END_OF_DOCUMENT_TOKEN_TO_BE_REPLACED

How many times have you found yourself saying “I’m going to have a fresh start on Monday”? END_OF_DOCUMENT_TOKEN_TO_BE_REPLACED

I’ve got a dirty little secret. Something that I need to get off my chest. I have never END_OF_DOCUMENT_TOKEN_TO_BE_REPLACED

Doesn’t quite sound right, does it? My New Year’s Resolution for 2014 was to work ‘in’ END_OF_DOCUMENT_TOKEN_TO_BE_REPLACED

Since we've been in Thailand we have both fallen in love with the local food! Thai food END_OF_DOCUMENT_TOKEN_TO_BE_REPLACED

Caroline Layzell is taking over blog duties this week. For all those who had a giggle at END_OF_DOCUMENT_TOKEN_TO_BE_REPLACED