You are here: Home / Blog / The Basics of Breathing
Nov
25 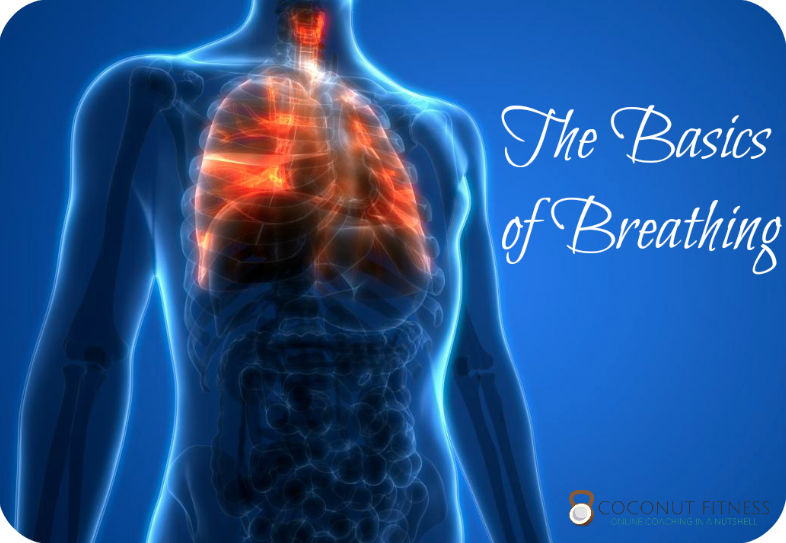 Most people are breathing wrong. Our respiration is the most important system in the human body but commonly the most over looked function when it comes to health and exercise. Far too many people simply do not understand the mechanics of breathing.

Essentially, breathing is the intake of oxygen and release of carbon dioxide and is something we all take for granted. As it is the most primary function of staying alive it is logical to consider the influence breathing has over our physiology. Every biologically system in the body depends on breathing.

The body will sacrifice whatever it needs to ensure respiration takes place. Any dysfunction from the head down is usually caused by faulty breathing patterns. In fact, poor breathing plays a pivotal role in up to 75% of the symptoms that cause individuals to see their Doctor!

What is a correct breathing pattern? 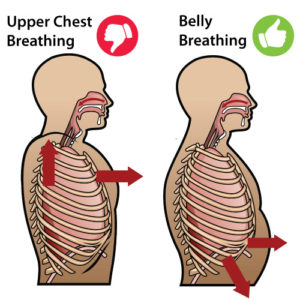 The diaphragm acts as a parachute and will fully expand when breathing through the belly.

A faulty breathing pattern is when breathing occurs through the mouth and inhalation takes up in the chest. The secondary respiratory muscles designed to help out in breathing get overused and cause the shoulders to lift up and neck to tighten. An incorrect breathing pattern uses 40,000 breaths a day. That is a lot of repetition of a faulty movement!

Natural breathing helps us bring in oxygen for cellular metabolism, maintains the balance of acid/alkaline levels in the bloodstream, moves life force energy (Chi, Prana) through the body and acts as a natural pump nourishing and removing toxins from the central nervous system. 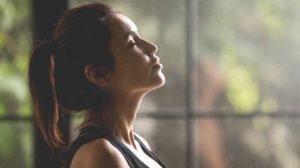 If you’re a regular at the Doctors then maybe it’s time to check if you’re breathing correctly.

What can make our breathing worse?

Certain exercise like too many abdominal crunches and bench pressing can alter our postural alignment and retard the respiration efficiency. Forward head posture and rounded shoulders are the main structural adaptations that occur with over exposure to these exercises.

Stress and anxiety can also increase our respiration rate creating overuse of the muscles that attach to the head producing knots in those areas and tension headaches. These are the same trigger points that your masseur may mention to you when you are getting a massage. All caused by faulty breathing! These knots will keep appearing unless your breathing is corrected.

how to breathe during exercise

There are a few exceptions to this rule. One rule is to always exhale as the spinal curvatures increase. An example would be a back extension over a Swiss ball where the curve of the lower spine increases.

The second exception is the grip we adopt during pulling exercises. If we are using a Lat Pulldown machine or a pull up with a pronated grip (palms facing away) then we should actually be breathing in as we pull. This is because the last 40º of lifting the arm up comes from extending the upper spine and therefore coming out of the fetal position. When we switch the grip to neutral (palms facing each other) or supinated (palms facing you) then we breathe out as we pull, as this grip doesn’t cause the arm to completely lift up. Getting this right could stop shoulder impingements and rotator cuff injuries.

This rule applies to any lifting when using a light load. It changes though when lifting heavy weights where you can only perform a maximum of 8 repetitions. The respiratory system also acts as a stabilizer system. The diaphragm is primarily a respiratory muscle and secondary a stabilizer muscle. When we lift a heavy load the central nervous system feels threatened and uses the diaphragm to support and protect the spine. This large muscle attaches to most of the ribs and stabilizes the body in rotational movement, which is the motion where most injuries occur! 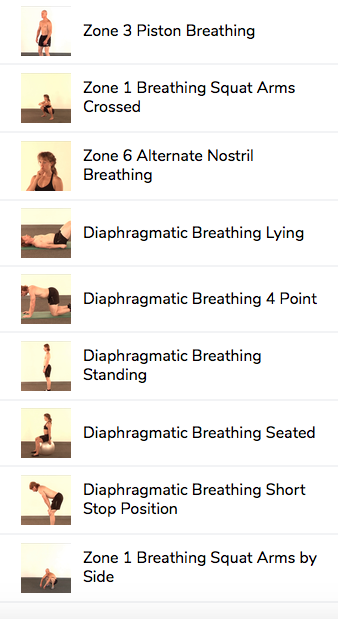 If you were told to pick up a pencil you would naturally breathe normally whereas if you were told to pick up a huge rock you would instinctively hold your breath. So, during heavy lifts in the gym, we should inhale before we lift the weight, hold our breath so the diaphragm is stabilizing the body and exhale through pursed lips during the hardest part of the move or the ‘sticking point’. Breathing correctly will mean you can throw away that weight belt, reduce risk of injury and become stronger in the process.

The final points to remember is that inhalation excites all the extensors in the body neurologically and exhalation excites all the flexors neurologically. If we are messing up our breathing we are also confusing the body by telling it one thing and doing another, which can’t lead to an effective workout! Breathing correctly during workouts is also meditative so you should be leaving the gym energized rather than exhausted!

Watch my chat with the breathing guru

Watch our YouTube video with Rod Savvides from Body and Mind Healing School in Chiang Mai, Thailand about how to breathe correctly and the benefits you will feel!

Many new mothers complain about their 'mummy tummy'. When working with mothers, whether they gave END_OF_DOCUMENT_TOKEN_TO_BE_REPLACED

Did you make a New Years Resolution? Maybe you made it on New Year's Eve but the Veuve END_OF_DOCUMENT_TOKEN_TO_BE_REPLACED

How many times have you found yourself saying “I’m going to have a fresh start on Monday”? END_OF_DOCUMENT_TOKEN_TO_BE_REPLACED

I’ve got a dirty little secret. Something that I need to get off my chest. I have never END_OF_DOCUMENT_TOKEN_TO_BE_REPLACED

Doesn’t quite sound right, does it? My New Year’s Resolution for 2014 was to work ‘in’ END_OF_DOCUMENT_TOKEN_TO_BE_REPLACED

Since we've been in Thailand we have both fallen in love with the local food! Thai food END_OF_DOCUMENT_TOKEN_TO_BE_REPLACED

Caroline Layzell is taking over blog duties this week. For all those who had a giggle at END_OF_DOCUMENT_TOKEN_TO_BE_REPLACED