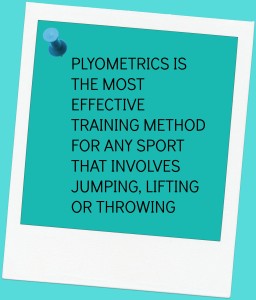 Have you ever played a sport like Volleyball and wanted to know you can jump higher, move faster and improve your overall game?

Beach volleyball is very popular in Bermuda and we used to play in a league on the beautiful sands of Horseshoe Bay.

I trained a Bermudian national volleyball player, in his preparation for the Island Games that were being held in Bermuda.

My main focus on his conditioning program was Plyometrics as it’s fundamentally the most effective training method for any sport that involves jumping, lifting or throwing.

Plyometrics is the term now applied to exercises that have their roots in eastern Europe, where they were first known simply as ‘jump training.’

Interest grew in the 1970’s when the eastern bloc nations emerged as superpowers on the world sport scene especially in track and field, gymnastics and weightlifting.

‘Plyo’ and ‘metrics’ are based on Latin origins and its interpretation means ‘measurable increases’.

This type of training was thought to be responsible for the rapid competitiveness of the eastern Europeans in track and field during multiple Olympic Games.

Throughout the 1980’s, coaches in sports such as volleyball, football and basketball began to use this philosophy.

From the 1990’s onwards, a great deal of research was taken to verify the safety and effectiveness of these exercises.

Today, it is considered an essential component of any athlete’s conditioning program.

Plyometric training is defined as exercises that enable a muscle to reach its maximum strength in as short a time as possible, which is known as power.

Power is being able to store and release energy efficiently.

Everything we do has some sort of elastic component to it, especially volleyball.

The more efficiently you can store and release energy, the less effort you have to give.

Think of your body as a pogo stick.

The metal framework is similar to your core, shoulders and hips and the springs are like your muscles.

You want your bodies to be able to store and release energy powerfully, just like that pogo stick.

Plyometric training will help you in volleyball but also in everyday life.

Every move you make has an elastic component.

When you jump, you stretch muscles. They release energy to propel you upwards.

Elasticity is your body’s shocks and springs.

This training also teaches your body how to reduce force which is just as important as generating it.

Lots of injuries occur from not decelerating quickly enough. Think about when you land from a big jump. Elasticity will help you slam on the brakes.

The jumps in plyometrics can be classified as jumps in place, standing jumps, multiple hops and jumps, bounding, box drills and depth jumps.

These exercises can be adapted to virtually every sport to help enhance the movements performed. By mimicking certain movements in plyometric training, you can quicken movement time and become more powerful.

In volleyball, the most effective drills are the depth jump, lunge jump and the jump and reach.

The depth jump starts with standing on a 12 inch box with toes close to the edge. You then step off the box and drop to land on both feet. Anticipate the landing and spring up as quickly as you can. Make the ground contact as short as possible. Perform 3 sets of 10 repetitions.

The lunge jump starts with feet in a lunge position with front leg 90 degrees at the hip and 90 degrees at the knee. Jump up using your arms to help you and land back in a lunge. Hold position for 2 seconds and immediately repeat. Perform 3 sets of 10 repetitions on each leg.

With the jump and reach, choose a high object or marking on a wall and stand underneath with shoulder width stance. Jump up continuously reaching for the object or mark with alternating hands. Time on the ground should be minimal. Perform 3 sets of 10 repetitions.

As you will notice, this is only three exercises but less is more with plyometric training.

Ligaments and tendons heal at a rate of about six times slower than muscle tissue.

The amount of rest in between sets is also crucial. A work to rest ratio of 1:5 to 1:10 is required to assure proper execution and intensity of the exercise.

So, if a single set of the jump and reach exercise takes 10 seconds to complete, give yourself 50 to 100 seconds rest.

Try to incorporate some plyometric training in your workouts and be more powerful and explosive at the sport you play.

Many new mothers complain about their 'mummy tummy'. When working with mothers, whether they gave END_OF_DOCUMENT_TOKEN_TO_BE_REPLACED

Did you make a New Years Resolution? Maybe you made it on New Year's Eve but the Veuve END_OF_DOCUMENT_TOKEN_TO_BE_REPLACED

How many times have you found yourself saying “I’m going to have a fresh start on Monday”? END_OF_DOCUMENT_TOKEN_TO_BE_REPLACED

I’ve got a dirty little secret. Something that I need to get off my chest. I have never END_OF_DOCUMENT_TOKEN_TO_BE_REPLACED

Doesn’t quite sound right, does it? My New Year’s Resolution for 2014 was to work ‘in’ END_OF_DOCUMENT_TOKEN_TO_BE_REPLACED

Since we've been in Thailand we have both fallen in love with the local food! Thai food END_OF_DOCUMENT_TOKEN_TO_BE_REPLACED

Caroline Layzell is taking over blog duties this week. For all those who had a giggle at END_OF_DOCUMENT_TOKEN_TO_BE_REPLACED