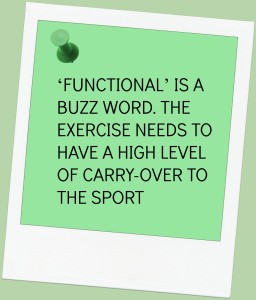 Millions of tennis fans were glued to the television screens watching Andy Murray become the first Briton in 77 years to win the Men’s Wimbledon title.

No doubt the tennis courts across the UK were a little busier after such an inspiring victory.

Most tennis enthusiasts will have coaching from the tennis pro but seldom use a gym to get functionally fit for the game.

Huge improvements can be made if the right conditioning program is followed.

Andy Murray improved dramatically once he started following such a training program. He went from being a skinny kid who was very skillful with the racquet to a strong, powerful Grand Slam winner.

This physical transformation was down to his functional strength and conditioning program.

‘Functional’ is a buzz word in the fitness industry at the moment and is regularly used by personal trainers and physiotherapists but what defines ‘functional’ exercise?

The word ‘functional’ is commonly used to describe something that is ‘useful’ or ‘applicable’ but for an exercise to be truly functional it needs to meet several characteristics outlined by Paul Chek in his book titled Movement That Matters.

We can apply these characteristics to a tennis conditioning program to make it functional for the game with a high level of carry-over to the sport.

As human beings we move across the ground under the influence of gravity.

Each activity we do uses specialised reflexes to protect us from hurting ourselves.

These reflexes help us with such abilities as putting our hands out if we have slipped over from chasing a drop shot by the net.

Tilting reflexes tend to be more dominant when the ground is moving like if we were wind surfing or skiing.

Righting reflexes are more dominant when moving across a fixed stable surface such as a tennis court.

We should then work on our tilting reflexes in the gym by performing a circuit of exercises starting with the most neurologically demanding moves.

For example, a dumbbell Russian Twist on a Swiss ball, followed by a single leg cable push finishing with walking lunges.

Spend 30 seconds on each exercise with one minute rest and repeat 5-10 times. 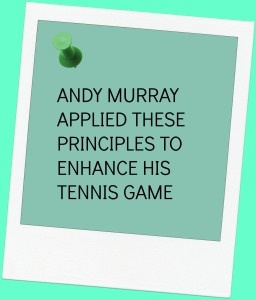 Maintaining a centre of gravity

In most activities and particularly in tennis, we must maintain our centre of gravity over our own base of support.

This is so important that we master it within the first 24 months of our life!

When our centre of gravity goes outside our base of support like when we are reaching to return a serve, we have more chance of falling over.

In functional exercises we integrate our muscle groups and righting and tilting reflexes.

We also need to work on our static postural stability.

The further we lean forward the more our extensor muscles have to work to stop us falling over.

Think how tired your back muscles can get when you are bending over in preparation to return a serve.

If our extensor muscles are not strong enough it will result in overuse of the ligaments, particularly in the lower spine.

The Prone Cobra is an ideal exercise to condition these muscles, holding for up to 60 seconds each time and repeating 3 times in total.

Dynamic stability is the ability to maintain an optimal axis of rotation in our joints.

We should always aim to perform exercises with free weights, bodyweight, medicine balls and cable machines.

These exercises will activate the body’s stabiliser system and make us stronger.

This is why you will always see a noticeable difference between a free squat and a Smith Machine squat or between a deadlift and a seated hamstring curl.

Squats, deadlifts and specifically lunges are all fantastic exercises to improve leg strength for tennis.

This concept is our way of storing movement patterns.

It is believed that the brain does not have adequate storage capacity to hold every movement pattern we have ever done.

A generalised movement pattern groups similar movements together that have the same relative timing, saving space in the brain.

An example would be the squat pattern.

The squat would help our vertical jump, which is very important when trying to hit an ace!

If we compare this to the leg extension machine there is a very poor carry over to the vertical jump.

This applies to most isolation exercises.

5 slow squats, 5 fast squats and 5 squat jumps all performed straight after each other is a great way to increase power in the legs.

An open-chain exercise is a movement in which you can overcome the object you are applying force to such as a dumbbell shoulder press.

A closed-chain exercise is when you cannot overcome the object you are pushing against such as when you are lunging across the floor or during a chin up.

In the game of tennis, the upper body is moving the racquet around so open-chain exercises are best.

For tennis, a dumbbell chest press would be a better choice than a push up.

The lower body is pushing against the court surface so closed-chain exercises will have the best carry-over for the game.

Squats for example would have greater benefits than the seated leg extension machine.

Andy Murray applied these principles to transform his tennis; “I’ve learned that it’s better to do just a couple of hours on court and two gym sessions a day. That’s what’s made me fitter and stronger” he admitted.

Now you can be too

Many new mothers complain about their 'mummy tummy'. When working with mothers, whether they gave END_OF_DOCUMENT_TOKEN_TO_BE_REPLACED

Did you make a New Years Resolution? Maybe you made it on New Year's Eve but the Veuve END_OF_DOCUMENT_TOKEN_TO_BE_REPLACED

How many times have you found yourself saying “I’m going to have a fresh start on Monday”? END_OF_DOCUMENT_TOKEN_TO_BE_REPLACED

I’ve got a dirty little secret. Something that I need to get off my chest. I have never END_OF_DOCUMENT_TOKEN_TO_BE_REPLACED

Doesn’t quite sound right, does it? My New Year’s Resolution for 2014 was to work ‘in’ END_OF_DOCUMENT_TOKEN_TO_BE_REPLACED

Since we've been in Thailand we have both fallen in love with the local food! Thai food END_OF_DOCUMENT_TOKEN_TO_BE_REPLACED

Caroline Layzell is taking over blog duties this week. For all those who had a giggle at END_OF_DOCUMENT_TOKEN_TO_BE_REPLACED