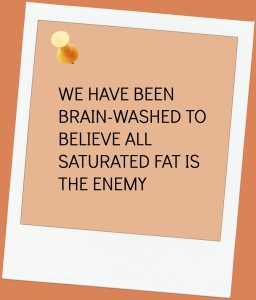 Have you heard of coconut oil? If so, do you eat it regularly?

The usual answer I get from my clients is a simple ‘No’.

Coconut oil is a saturated fat so it’s been demonized by the mass media and portrayed as a food that is unhealthy, makes us fat and gives us heart disease.

This couldn’t be further from the truth.

I ask all my clients to go the grocery store and buy a jar of this wonder food.

We all need to eat saturated fat and this oil reduces inflammation, regulates blood sugar, feeds our hormones and nurtures the adrenal glands.

The usual hesitation people have about consuming coconut oil is that it causes heart disease. This is understandable as we are brainwashed to believe all saturated fat is the enemy.

Research shows that during this epidemic of heart disease we are currently facing, vegetable oil consumption has increased by over 300% and saturated fat has actually dropped while heart disease is rapidly rising.

It doesn’t take a rocket scientist to figure out that saturated fat is not the problem!

A look at the plaque in arteries of heart disease patients has revealed about 27% is saturated fat and the remainder is made up of polyunsaturated fat.

Even looking at any old cookbook from a few generations ago will reveal that butter, lard and coconut oil were all commonly used in cooking. During this era, heart disease was relatively unheard of.

One of the main benefits of cooking with coconut oil is that it keeps its molecular structure and can be heated to over 300 degrees Fahrenheit.

Alternatives like the polyunsaturated fats in the form of vegetable oils become unstable in high heat and turn rancid.

Rancid fat in the body causes inflammation and free radical damage leading to heart disease and arthritis. These rancid oils actually have to be deodourised so they don’t stink when used in cooking!

60% of the brain is made up of this fat, particularly the part that is responsible for memory.

By increasing saturated fat in the diet it will help develop tissue in the brain improving its function and build hormones in the body.

Coconut oil can also be used on the skin and hair as it has a nourishing and softening effect.

The oil is easily absorbed due to its chemical structure so can replace many moisturisers and conditioners.

Try it today by using it in your cooking or simply taking a few tablespoons every day to see the wonders for yourself.

Many new mothers complain about their 'mummy tummy'. When working with mothers, whether they gave END_OF_DOCUMENT_TOKEN_TO_BE_REPLACED

Did you make a New Years Resolution? Maybe you made it on New Year's Eve but the Veuve END_OF_DOCUMENT_TOKEN_TO_BE_REPLACED

How many times have you found yourself saying “I’m going to have a fresh start on Monday”? END_OF_DOCUMENT_TOKEN_TO_BE_REPLACED

I’ve got a dirty little secret. Something that I need to get off my chest. I have never END_OF_DOCUMENT_TOKEN_TO_BE_REPLACED

Doesn’t quite sound right, does it? My New Year’s Resolution for 2014 was to work ‘in’ END_OF_DOCUMENT_TOKEN_TO_BE_REPLACED

Since we've been in Thailand we have both fallen in love with the local food! Thai food END_OF_DOCUMENT_TOKEN_TO_BE_REPLACED

Caroline Layzell is taking over blog duties this week. For all those who had a giggle at END_OF_DOCUMENT_TOKEN_TO_BE_REPLACED