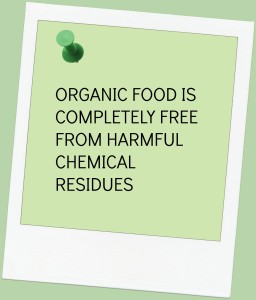 Over the last number of years there has been a growing trend worldwide towards organic foods.

Recently, the industry is growing roughly 10% every year. It’s a booming industry but is it worth the extra expense?

Organic is a way of growing agricultural products or raising livestock following a high set of standards and guarantees specific practices are used for both food and non-food products.

For organic agricultural products, the organic label assures that the foods were grown without the use of toxins like pesticides and fertilizers.

For livestock to be classed as organic it must be farmed without the use of synthetic hormones, antibiotics, genetic engineering, or cloning, and minimally processed without artificial ingredients and preservatives.

Any packaging that contains an Organic seal must have 100% organic ingredients included.

However products labeled “organic” are more likely to have higher price tags because of these high standards in the production process.

These chemicals have been linked to cancer and many other diseases.

This is because organic foods contain high levels of a antioxidants called phenolic compounds, which are a group of secondary nutrients.

According to the researchers, phenolic compounds are ten times more efficient at destroying cancer causing free radicals in the body than other antioxidants such as vitamins C and E.

One of the largest studies on organic food, the Haughley Experiment, found that cows fed organic produce ate less, but consistently produced more milk. This is believed to be a result of the quality of protein in the grass and depends largely on the soil conditions in which the grass is grown.

The quality of the soil in conventional farming is depleted as much as 85% and is usually the result of chemical fertilizers, herbicides and fungicides.

While there is much controversy over the nutritional differences between organic and conventionally farmed produce, meats and poultry, one thing is clear, organically raised foods are free from harmful chemical residues!

So why wait until you are sick to start eating good quality food?

Organic farming is better for the environment as a whole.

It is how we survived for thousands of years.

Modern farming using toxins such as chemical fertilizers, pesticides, herbicides and fungicides that disrupt and damage the food chain.

Remember, when you spend a bit more to buy organic, you are not only doing your health a favour, you are helping Mother Earth too.

Many new mothers complain about their 'mummy tummy'. When working with mothers, whether they gave END_OF_DOCUMENT_TOKEN_TO_BE_REPLACED

Did you make a New Years Resolution? Maybe you made it on New Year's Eve but the Veuve END_OF_DOCUMENT_TOKEN_TO_BE_REPLACED

How many times have you found yourself saying “I’m going to have a fresh start on Monday”? END_OF_DOCUMENT_TOKEN_TO_BE_REPLACED

I’ve got a dirty little secret. Something that I need to get off my chest. I have never END_OF_DOCUMENT_TOKEN_TO_BE_REPLACED

Doesn’t quite sound right, does it? My New Year’s Resolution for 2014 was to work ‘in’ END_OF_DOCUMENT_TOKEN_TO_BE_REPLACED

Since we've been in Thailand we have both fallen in love with the local food! Thai food END_OF_DOCUMENT_TOKEN_TO_BE_REPLACED

Caroline Layzell is taking over blog duties this week. For all those who had a giggle at END_OF_DOCUMENT_TOKEN_TO_BE_REPLACED