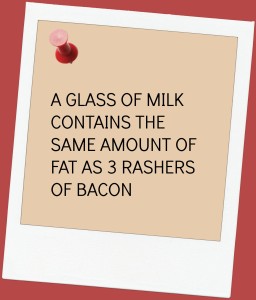 One of our earliest childhood memories is usually our parents telling us to drink a glass of milk to help us grow big and strong.

However fast forward and you may find that you have joined one of the 25 million people over 40 living in America with osteoporosis.

Even though they have been consuming milk daily since childhood!

We are told that the calcium in milk is vital for developing strong bones, but what we’re not told is that the same glass of milk contains the same amount of fat that’s found in the equivalent of 3 rashers of bacon, even the many low fat varieties of milk!

This leads us onto the fact that milk is one of the primary causes of heart disease.

You are most likely reading this is slight disbelief, I wish that the above problems were the only ones related to milk.

It gets more alarming.

A cow’s natural lifespan is about 25 years.

Cows in the dairy industry are killed after only four or five years as nearly 40% of dairy cows are lame because of the confinement, filth, and strain of being almost constantly pregnant and giving milk.

These cows are pumped full of drugs to keep them alive.

In 1990, genetically modified milks made their way onto the supermarket shelves.

This milk is produced from cows that are treated with recombinant bovine growth hormone (rBGH). Cows that are given this hormone produce on average 20% more milk.

The dairy farmers had dollar signs in their eyes, along with the drug companies selling these growth hormones.

But whilst this hormone may produce more milk in cows, what is it doing to us humans?

It’s known to cause growth defects in the human body due to the fact that it alters the levels of a compound in our bodies called IGF-1.

This altered compound is directly linked to the increased transformation of normal breast tissue to cancerous cells.

Okay so now you have your not so happy, hormone pumped cow, suffering from disease from the effects that the hormone is having on their bodies, and now they’re going to be grazing fields that are treated with pesticides and fertilizers.

To make the sick cows feel better they are given large amounts of antibiotics, which swirl their way through the cow along with the rest of the chemicals. 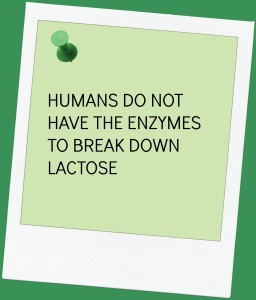 You may be thinking that this is OK though because the milk is then pasteurised before consumption, and this destroys all the harmful chemicals.

But the pasteurisation process also destroys all of the healthy vitamins and minerals that milk has been touted to have.

This whole process results in a toxic brew of white stuff that is so chemically altered that it’s nowhere near close to the milk that would come directly from a happy cow grazing in the green fields 100 years ago.

We are much better off drinking raw organic milk.

So the white stuff labeled as milk that we consume on a daily basis in coffee, cereal, desserts, etc. is still going strong making these drug companies richer by the day and society more sick.

This leads us on to the next point about milk.

The more milk that is consumed the more health problems arise from the fact that proteins found in milk actually exert allergic effects in humans.

This is most commonly know as lactose intolerance.

Our digestive system is not designed to drink milk after the age of breastfeeding and especially another mammal’s milk!

Humans do not have the enzymes to break down the lactose. This causes a whole list of other problems such as diarrhea, constipations, fatigue and stomach cramps along with asthma and sinus problems.

With all these problems coming from only one source why do we continue to drink this stuff?

More people are becoming aware of these alarming facts along with many farmers who are actively promoting the non-use of these growth hormones.

But there is still a large amount of the population that isn’t aware of the dangers.

Go for the alternatives such as almond milk, coconut milk, rice milk, goat’s milk or even do what Popeye does and grab a bowl of spinach. These all contain an adequate amount of calcium needed for strong healthy bones.

By eliminating milk we can eliminate the single most disease causing factor for all of humanity.

Many new mothers complain about their 'mummy tummy'. When working with mothers, whether they gave END_OF_DOCUMENT_TOKEN_TO_BE_REPLACED

Did you make a New Years Resolution? Maybe you made it on New Year's Eve but the Veuve END_OF_DOCUMENT_TOKEN_TO_BE_REPLACED

How many times have you found yourself saying “I’m going to have a fresh start on Monday”? END_OF_DOCUMENT_TOKEN_TO_BE_REPLACED

I’ve got a dirty little secret. Something that I need to get off my chest. I have never END_OF_DOCUMENT_TOKEN_TO_BE_REPLACED

Doesn’t quite sound right, does it? My New Year’s Resolution for 2014 was to work ‘in’ END_OF_DOCUMENT_TOKEN_TO_BE_REPLACED

Since we've been in Thailand we have both fallen in love with the local food! Thai food END_OF_DOCUMENT_TOKEN_TO_BE_REPLACED

Caroline Layzell is taking over blog duties this week. For all those who had a giggle at END_OF_DOCUMENT_TOKEN_TO_BE_REPLACED